I’ve been dropping out lately. It could be staring at the monotonous white tile wall while in the shower or my keyboard prior to typing this or a green light at an intersection. Guess you could say I’ve been quite low – and never being one for asking help – so I mustered up the energy to draft this entry. Lord knows I’m not in the mood to change out of the clothes I’ve been wearing for the past four days, shower, or make food. About half of my twenties have been filled with sickness, depression, and loneliness. Maybe that’s normal but according to what I see, it doesn’t appear that way.

I’m thoroughly convinced that without a vibrant social life or definitive purpose in life, one’s vitality is essential for well-being. Normally, I’m full of energy; run a few miles in the morning, yoga by lunchtime, work done by dinner, and a good book in the evening. It’s kept me in good shape most of my life and can be done without relying on anyone else, which is the best way to stay consistent, no? In my early twenties, I seldom considered what life would be like if I was no longer able to do any of these things. Which brings me here today.

Who knew that when I grew up I’d be a collector of incurable autoimmune diseases?

Eight months ago, I started flaring up again. It comes out of nowhere and I tend to be extremely reluctant to put my workouts on hold or drastically change my diet. I tell myself, “Who knows how long this one will last? No need to turn your world upside down. That’ll only stress you out and make matters worse!” But everything gets worse anyway.

I know the drill by now.

Besides rent, main expenditures switch from weekend events to pricey medical bills. (Gotta pay up for all the poking and prodding. Yay America.) It’s a sensible change since I never feel like going out anymore. Sure, some days are better than others but for the most part, socializing sucks up all my energy. In short, I become a diminutive shadow of my former self.

I feel ugly, sick, and stupid.

These are no easy feats to overcome. And it helps explain why I’ve been single for over 2 years now. And I should clarify what I mean by “single” because many people have adopted this word for other (more upbeat) means.

The way you navigate the world on a daily basis morphs as well. Stimuli that bring back memories of intimacy can be uplifting but they tend to be followed by a crippling crash. I don’t expect everyone to understand this but if our experiences were identical, I guarantee you would.

For example, on my morning subway commute, a woman’s scent may traverse the train car and get to me, causing a flood of feelings of how life was like when I had someone to call late at night, or someone to hold when the doctors found a tumor in my mom’s brain. Unintended touches from strangers yield similar effects. Maybe it’s the barista’s hand slightly grazing mine as she hands back my credit card, or someone brushing against my shoulder exiting the train. To be sure, I NEVER seek this out, as that would be a violation of personal space and vastly immoral. Regardless, I’m ashamed of these flooding memories and feelings from strangers, as it has nothing to do with them. Essentially, I’m triggered by these sensations since they are rare.

A note for all you happy-go-lucky extroverts that read this and think dude, you think waayyyyyyy too much. Live a little.

I fully understand the power of getting out of one’s head. Believe you me. Granted, that’s all I need to do but what I’m expressing is a long-term, formless feeling of self-doubt, insecurity, and dejection stemming from physical ailments and other circumstances that are only partially in my control. Therefore, it’s less about therapy, improv classes, meditation, support groups, etc. and more about riding this shitty wave out, welcoming that bewildering shock that comes from crashing on the shore, dusting myself off, and beginning again.

In the interim, I occasionally write to remind myself I’ve been here before, will be here again (hopefully, not too soon), and survival is most probable. Rinse and repeat; just add water; set it and forget it.

It’s been a few years since I’ve contributed to this blog, so I should clarify that despite my absence, I’ve remained single, just low on the hustle. What brought me back is a little piece of information: my ex got married last month. She, along with my many rejections, was my muse that inspired this blog; that and strong bouts of depression, anxiety and insufferable lonliness. You know, the usual suspects.  🙂

I loved that woman. She’s the only person I’ve ever been with who had opened new doors of experience for me – expanding my bounds, and solidifing my love of the outdoors. There were growing pains that made both of us irritable at times and only if I had known what she was going through, maybe our relationship wouldn’t have ended the way it did. Shoving love at a problem doesn’t make it go away.

Her mental disturbances, especially the mood swings, lacked any predictable design. Regardless, I wouldn’t believe it and always thought there was something I could do to fix things. After all, when she was up, we would both relish in the euphoria. So, likewise, when she was down, we would both perish in the abyss. Things came to an ugly end when she took a steak knife to my throat on my 23rd birthday. The reason? She had burned a few slices of bacon. At least, that was the trigger – not very hard to find one when your headspace is a latent minefield. If you’re curious, I wrote about her in Girl Fail #21 (Part 1 and Part 2).

And so, we split up and I remained attached, kind of. She consumed my thoughts. Sure, I was heartbroken but never like this. My future had been altered by unseen hands and even though I wanted to move on and find someone else, I couldn’t. New York City is like that sometimes. It didn’t matter how many new faces I met, the ROI was zero. Over time, I realized that she never loved me; instead, needed someone like me in her life at the time. I fulfilled a need. That’s it. Period. It’s good to feel useful, don’t it? 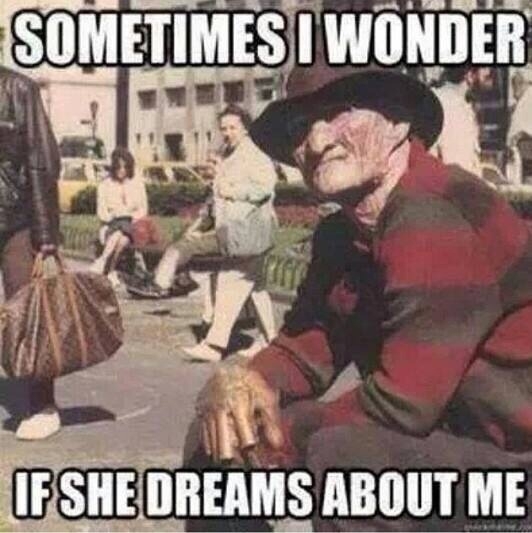 She found another man a few weeks after we ended things. I was alone. Following that guy, she quickly found someone else. They started dating, he moved in, and last month, they got married. (It sounds like I kept tabs on her but I swear I did not – just providing a quick summary.)

It’s not the marriage per se that bugs me. It’s how easy everything was for her. To move on; find another job; another apartment; another man; another love. She had all these choices, and through no particular effort of her own. Begrudgingly, I witnessed this and heard about it. It’s clear that the purpose I served was temporary and small, and so, I, too, felt small.

This is a familiar cycle. I no longer remember what it feels like to hold someone’s hand, or to carress a lover’s back, or to run my fingers through their hair. Show me another blogger that knows this despair and laughs when friends bring up their 6-month dry spell – they are my equal. The gap between my ex and I is unbound. Similarly, so is the one between me and serial daters (the most common type of blogs about the single life).

But dear reader, this changes. Like all things in life, this too will come to pass. We must wait. Wait until we find a crooked neighbor to love with our crooked heart, reap the time, and dispel the morning sun and invtie the rain when it’s all done. Only to begin again. We must wait.

Friend Threshold: The maximal amount of friends or loved ones a person chooses to maintain. All other associations will either be discarded immediately or left underdeveloped.

What’s your number? Did you reach it? How old were you? Moreover, how did it feel?

I ponder this out of sheer ignorance. The idea of having a myriad of friends, a sweet social network, remains a foreign concept to me, and not by choice. Without my consent, I’ve become a loner, and given my haphazard track record, one might even conclude that it was purposeful and assiduously sought out.

After spending another birthday alone last week, I started digging into what this figurative “friend threshold” is. (Oddly enough, you could take it literally as well. Most notably, Facebook has a harsh 5,000 friend limit; consider yourself warned.) From all the blogs, forlorn songs, confessional websites, historical novels, etc., one would effortlessly conclude that you’re more likely to run into someone seeking friendship than someone not willing to squander any of their social time. And yet, each time I fail making that connection, it ironically connects me to that feeling that’s been sinking. I’m no stranger to Miss Misery. As I become mired in dialogue going nowhere, she pours the whiskey, listens silently, and never forgets to top me off.

In part, I blame the city. Active New Yorkers appear, at the very least, brimmed with companionship. Their ships have boarded and departed, and there I am in some makeshift “Cast Away”raft clumsily paddling towards their modern vessel. In all honestly, I’m not advocating to readily accept every human as your best friend. (We have dogs for that.) But there is plenty of middle ground that’s rarely granted to expatriates like myself.

I’ll give an example.

I organized a pizza party with my roommates and we all chipped in on spreading the word. As luck would have it, the apartment across from us is occupied by three women our age, so I knocked on their door to invite them. Within 10 seconds, my neighbor made it seem as though my presence was that of an intrusive gadfly, despite just standing in the hallway.

“Hey! I’m Single Guy in NYC, I’m not sure if you remember me but I’m you’re neighbor.”

“Okay…” she sighed, hardening her grip on her door frame.

“Well, I just wanted to let you know that my roommates and I are having a party next week and, if you’re all free, you should come hang out.”

You might think she’s just shy but she’s really not. On the contrary, from what I’ve gathered living on the same floor as her, she’s a lively person. Most likely your average beautiful urban 20-something year old just relishing in their prime. And probably comfortable with her friend threshold. Pizza party? Ha. What’s in it for me?

I guess I see her point.

This will be one of my most important posts and it’s something I’ve wanted to get out of my system for a while now. I’ve dated three people with depression; one relationship became quite serious. I ruefully admit that it took too long for me to channel my compounded confusion into some sense for the organized chaos I experienced. Here’s 10 things I wish someone had told me back then:

I’ll close with another sobering thought. You know how in the movies, when the romantically involved protagonists have an insufferable altercation followed by some time apart, and then one person says something to the other person that acts as a relationship-elixir and they live happily ever after? Well, that’s nothing but a big crock of bull schnitzel. Be open-minded, yet realistic, and be well my friends.